The group is known as Hausmusik, a term for performances in intimate and listener friendly venues such as churches and living rooms of private houses. Both performer and audience numbers are heavily  restricted. The result is an intimacy of delivery, close contact between audience and players, and the opportunity to hear individual instruments and their uniquely blended sounds with a clarity and richness larger groups in great halls cannot provide. This audience was expectant. They were promised three superb baroque musicians delivering a mixture of solo voice cantatas interspersed with other works performed on baroque harpsichord, baroque cello and the baroque oboe known as an hautboy. The programme looked fascinating, especially as it included comparative unknowns like Mancini - Francesco, not Henry, and Aldrovandini, who were composing and performing in the early and mid 1700s. It was more than fascinating. It was a sumptuous exploration of period composition by players who were technically superb and creatively innovative. At the same time as she delivered the harpsichord line, group leader Paczian was the vocal soloist in the canatas. These formally constructed and elegantly delivered works were the perfect vehicle for Paczian's full and mellifluous mezzo, and provided an unique and memorable musical experience for the audience. In the beautiful Vivaldi G minor sonata for cello, Polly Sussex introduced her cello - made in the mid 1700s and  strung with sheep gut and silver wound strings - before delivering a virtuoso performance which bewitched her audience. As well as being a key performer in the group, hauboist John Paczian-Green impressed the audience with an illuminating commentary, introducing the music and the instruments such that that the consequent delivery of each work was received with fresh understanding  and genuine enthusiasm. True musicians. Unique music. And if you look up the Hausmusik website you will see that more is coming later in the year. 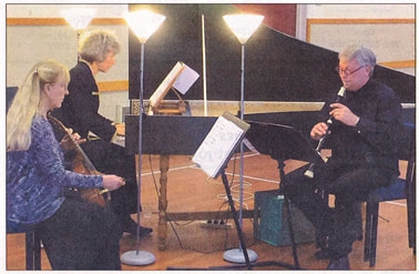 Delights of the Soul concert a musical transformation
By Suzanne Hansen
(The Mercury Bay Informer, Issue 760, 27 September 2017)
​
Listening to the Hausmusik chamber ensemble perform their Delights of the Soul concert last Sunday, I imagined myself in a European parlour after dinner, in front of the fire with a fine claret in my hand, enjoying the finest music of the day. It was hard to fathom when I opened my eyes that I was actually sitting in the Whitianga Town Hall in the middle of the afternoon. Such was the musical transformation of the performance.

The trio of harpsichordist and mezzo soprano, Rita Paczian, baroque oboist, John Green and baroque cellist and viola da gambist, Polly Sussex were mesmerising as they performed their selection of German baroque music, all on period instruments. Their detailed adherence to the instruments was demonstrated by the fact that all the instruments were tuned at baroque pitch, which is a semitone lower than modern instruments.

The concert comprised of two halves, featuring different styles of music by four renowned composers of the baroque period - - Bach, Handel, Telemann and Heinichen. Although Bach and Handel are better known today, Telemann was more famous than either of them in the baroque period and Heinichen was the source of much jealously on the part of Bach who coveted his (Heinichen’s) prestigious role of music director at the Saxon Court in Dresden. It was only the political decline Saxony which placed Heinichen’s music into years of obscurity. Fortunately, his manuscripts survived in the Dresden State Library for many years, through various wars and bombings, and have enjoyed a resurgence.

The authenticity, variety and quality of the mix of music Hausmusik performed were made even more special by John Green’s narrative throughout. John added a lot of value to our experience by sharing his vast knowledge of the instruments, music and history of the works. His wife, Rita also amazed us with her mastery on the harpsichord, but then stunned the audience with her operatic Mezzo voice, playing and singing through an aria and two cantatas, culminating in the New Zealand, and perhaps a Southern Hemisphere, premiere of Handel’s Venus and Adonis Cantata. Venus and Adonis, an incomplete manuscript written in Handel’s own hand, was never actually performed in Handel’s lifetime. The work was only recently completed in the appropriate style by harpsichordist, Luca Guglielmi, who generously provided his unpublished manuscript to Hausmusik for this performance.

The third of the trio, viola da gambist Polly Sussex, played a bass viol, the lowest instrument of the viola da gamba family, which was a direct copy of an actual instrument from the 17th Century, played by a young courtier in the day. She performed a simple and haunting three movement piece by Telemann, which was an audience favourite.

The concert attracted a good-sized audience for such specialised music and the Hausmusik ensemble were genuinely impressed with the enthusiasm, keen interest and knowledge of those who attended. Saying that this was one of their best audiences, Rita commented that they were amazed to see such an exciting music and arts culture in Whitianga and that they would definitely return soon.